Seraphim remain on the Rare Breeds List as an uncommon variety, with a few dedicated Fanciers across the United States seriously focused on maintaining and improving this 27 year old breed. The Seraphim project, started by Anne (Anya) Ellis in 1986, was intended to create a “Classic”, an artistic vision that once achieved would remain unchanged over time.

Yet Seraphim have changed significantly since 1986, and from the original Standard of Perfection of 1993, and their first exposure at a National Show at Salt Lake City in 1996. Several iterations of the Standard were developed as it became clear what was artistically and physically possible through selective breeding, with a “final” classic Standard rendered in 2009. Still, some minor delicate enhancements have occurred since then, and what Anya ultimately believes to be the final “final” will likely be unveiled in 2014, an ultimate Standard of Perfection based upon real-life experience in the loft that includes subtle changes to the head, swoop, peak, mane, and feather length. The end result is dramatic and beautiful, powerful yet delicate, alert yet peaceful, dignified but intense—and possible in real life by the dedicated Fancier.

So to celebrate this milestone in the history of Seraphim, the SCI decided, for the first time in its eleven year history, to sanction an independent Seraphim Club International Meet in Des Moines with the Iowa State Pigeon Association, and in affiliation with the Rare Breeds Pigeon Club. Not only that, the SCI decided this should be their first official National Meet for Seraphim. For such a special occasion, the Club had to do something a bit different than the normal routine, and focus strongly on new education for exhibitors to include what is expected of today’s Seraph, as well as on the history, vision, art, science, and philosophy behind Seraphim. Anya agreed to be the Judge and dedicate herself to a day of intense interaction with the exhibitors. What could have been a 90 minute long task of judging instead became a five hour marathon of education, with all exhibitors watching, listening, and asking questions as Anya went from bird to bird explaining every detail of what makes a great Seraph and what doesn’t, pulling information from many fields to paint a picture of the ultimate Seraph for the group. It was by far the most useful and fulfilling experience any of the exhibitors present ever had at a pigeon show—and exhausting! But at the end of the day, everyone understood the task before them, and exactly why their Seraphim did or did not meet the Standard of Perfection, and they understood the difference between the 2013 Seraph and the 1996 Seraph. Everyone left the show tired but newly energized.

In keeping with the significance of this first-ever event, the SCI decorated the final judging area with white feather boas, an enormous canister of colorful holiday ornaments, and an award-winning wood carving of a Seraph done by Clark Weaver of Grinnell, Iowa. Exhibitors were present from Iowa, Missouri, Kansas, and Minnesota, and there were thirty-five entries for the show. Those awarded points for “Highly Superior” Seraphim included David Orth of Kansas, Judy Miller of Missouri, and David Coster of Iowa. Mary McNeil of Iowa had a last minute complication that prevented her from showing any birds that would no doubt have won points too. 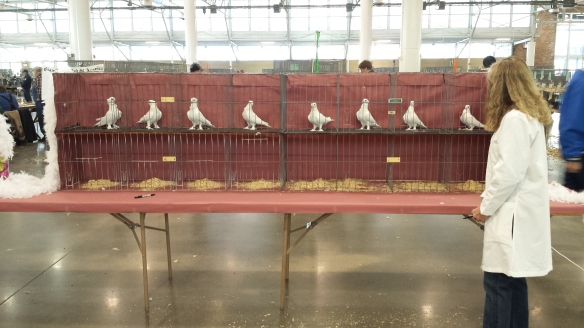 I believe the highlight for Anya Ellis may have been awarding the Champion Seraph title to a hen instead of a cock, but then again it may have been the surprise and thrill of seeing so many well-bred Seraphim under one roof from which to choose a champion, a real testament to her life-long dedication to creating the “Angel of the Pigeon Fancy.”