Mosaicism is the status of having more than one genetic population of cells in a single individual which developed from a single fertilized egg. This condition can be caused by a spontaneous mutation in a single cell in the early embryo that leads to the mutation being multiplied every time there is another cell division as the embryo develops. It can also be caused by less than robust DNA replication during cell division (mitosis) so that some genes become inactive or left behind. Mosaicism occurs easily due to the millions of cell divisions and possibilities for replication errors that occur during the development of an embryo. In fact, 70-90% of complex organisms (maybe all?) are affected by mosaicism.

Mosaicism can involve any type of chromosome and its genetic apparatus. Some genetic changes are visible and others are invisible. An example of visible mosaicism could be something as simple as a large birthmark where a single genetic change results in a population of skin cells that looks different from all of the rest. An invisible mosaic might have two or more lines of cells with genetic changes that result in slight variations in the molecular structure of the enzymes produced by the different cell lines. In most cases mosaicism does not lead to disabilities but it sometimes can.

Last year I hand-raised a little runt of a baby Seraph that grew into a beautiful adult. As a juvenile it had the usual red Satinette markings, in this case lacewing/spot-tail. I didn’t study each feather, but it turns out that one of the tail feathers was not recessive red. When the bird molted into adult pure white feathers she had a single perfectly marked tail feather in blue with a perfect white spot. Why did this happen? Sometimes mosaicism can happen in a very tiny patch of tissue – in this case in a single feather follicle. The cells in that follicle lost their functioning Seraph Color Gene Complex for some reason during embryonic development.

A year later I paired the Mosaic hen with the single spotted tail feather with a perfectly marked (pure white) Seraph cock. Their third baby was a wonderful specimen but had a large patch of brown mosaicism on his right wing shield. Here he is below, still a baby, but showing a brown lacewing pattern in the shield of his right wing where the white-sides and recessive red genes failed to express. He has an entire segment of a wing that is missing the genetic machinery of the Seraph Color Gene Complex. I didn’t notice this when he was a baby as the drab markings didn’t register as being different from the surrounding recessive red feathers he had at the time. Now it is obvious. the bird to his lower right is the same age and has nearly complete replacement of red feathers in the wing shield with white as expected. The juvenile red tail feathers in both birds have yet to be replaced – that is NOT mosaicism. 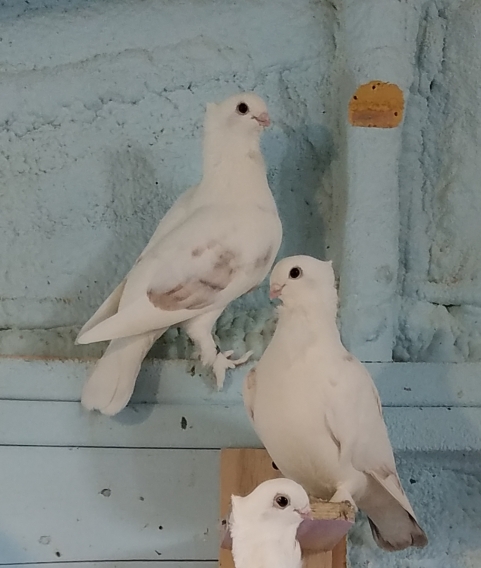 The cock this boy’s mother is with has sired at least thirty offspring with another perfect white Seraph hen, none of which demonstrated color mosaicism, so the trait seems to have been passed down from the hen. Since this Mosaic appeared, two more have appeared in the same nest, each with a colored tail feather in the exact same position as their mother’s colored tail feather. The hen and three Mosaic babies were taken out of the breeding pool. Seraphim are a a product of careful inbreeding and have complex recessive traits. One can see how careful you must be to avoid genetic pitfalls  that can ruin the color of an entire line of birds.

The only other Seraph mosaic I ever had was in 2009. I didn’t understand what he was. He was a beautiful and stunning bird. I sent him to California to a fellow near Sacramento. A year later he called me to tell me that the colored feathers contaminating the birds left wind did not disappear at the second year molt. It was only then that I realized the colored feathers were brown, not recessive red, and would never disappear. At the time I advised him to breed the bird, as it was otherwise amazing and the standard opinion at the time was that mosaicism wasn’t inherited, but rather just a genetic accident. Well, that was wrong. A genetic accident – yes; a non-inheritable genetic accident – no.

The moral to this story? Watch very carefully for evidence of genetic abnormalities in your Seraphim and remove anomalous birds from the breeding program, whatever the fault.