The Des Moines fairgrounds was once again the location for the SCI’s national club meet in 2016. Anya Ellis flew in from Connecticut to judge her own creation and see how this Rare Breed is coming along in the hands of other interested Fanciers. Seraphim are shown in the Rare Breeds section as a rule, but for the past couple of years the SCI has been able to put together a sanctioned club meet in Des Moines. We hope to be able to continue with a sanctioned show most years in Des Moines with the Iowa State Pigeon Association’s annual “Pigeons on the Prairie” show.

There were twenty Seraphim at the show, eleven of which managed to make it to the ranking of “Highly Superior”. 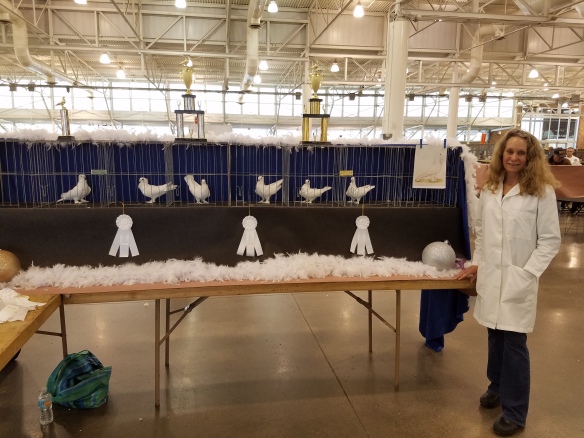 Above are the top designated Seraphim in The Seraphim Club International’s third-ever national club show, celebrating the 90th anniversary of the Iowa State Pigeon Association’s “Pigeons on the Prairie” annual combined show, with Anya Ellis, Judge and developer of the Seraphim breed. The winners are adorned by their various trophies and ribbons, tired after a long day of being poked and prodded and talked about. The ISPA Show had about 4,400 entries this year with lots of designated club shows, so the SCI was part of a very big scene!